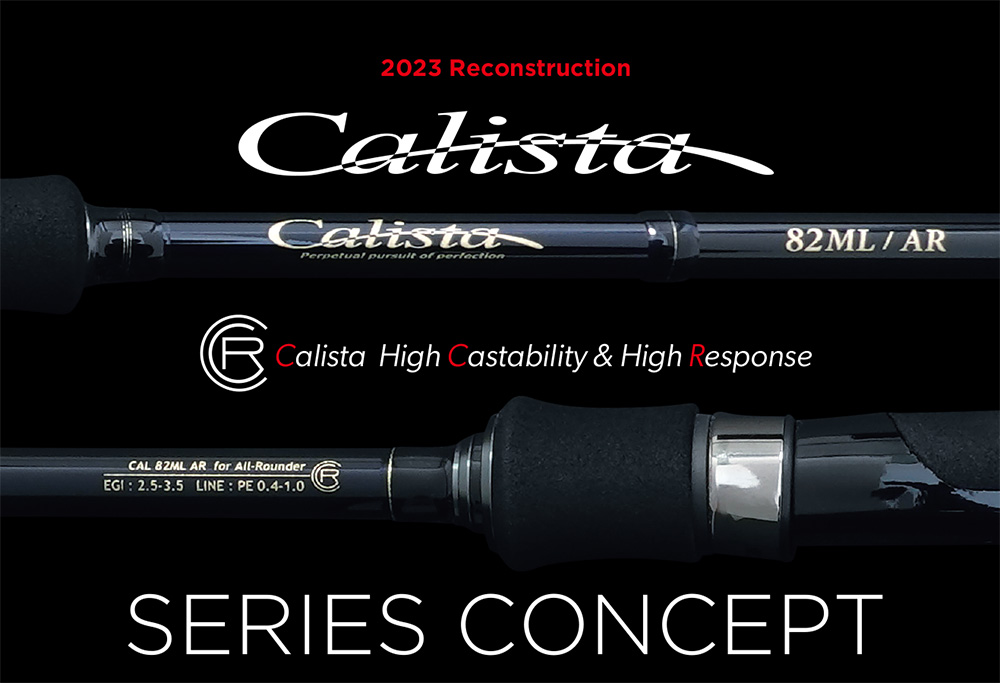 As already announced in the catalog and website, in 2023, the egging category flagship “Calista” will be reconstructed and released.
Considering that the old series was released in 2015, it took 8 years for the renewal, but there is a reason for this.

YAMAGA Blanks manufacture blanks at our own factory in Japan, and we take great pride in that. The three performances of lightness, castability, and strength are always required for blanks, and egging rods are products that require these elements the most.

It is natural for us to demand uncompromising performance from our flagship egging model Calista, and the challenge to get performance with the previous model ” Calista TZ/NANO” was to create a model that is light, high response, and easy to enjoy egging.
We pursued the design and materials with the goal of extremely high blank performance, such as easy casting and easy jerking.

That’s why we couldn’t easily release the next model with a little evolution, and while constantly repeating tests, we finally arrived at a line-up with performance and concepts worthy of the next-generation as new Calista in 2022.
And we decided to release it in the fall of 2023 finally.

What we wanted from the new Calista

The main concept of the new Calista (hereinafter referred to as 2023 Calista) that breaks the 8-year silence (there were 710M and 82M releases on the way…) is a major improvement in “easier, lighter cast feel and usability” and a lineup itself. – It is a reconstruction of the concept.

To give you a concrete explanation of the performance aspect of making it easier and lighter, it is largely due to the evolution of the carbon material and the speed of convergence from high repulsion due to the new design.

When casting, you can quickly swing through with a small motion and cast a long distance, and during the action of the Egi, even a small action input can let the Egi move smoothly, making it easy to adjust the range of movement.
And from casting to action, the convergence of shaking from the belly to the tip is faster, and the tip that will not give you unwanted wobble makes it possible to further sharpen your senses.
Of course, the speed of convergence from this bend has a great effect on sensitivity, realizing even higher sensitivity performance of the blank, and the shape around the front grip makes it easy to touch the blank.

In addition, since you can perform everything from casting to jerking with a small amount of force, the burden on your wrist is reduced, and you can maintain your concentration even during a whole day of fishing.
Reducing the burden of using this rod has been a consistent concept since the first Calista, and you should be able to experience further evolution with the 2023 Calista.

With the 2023 Callista, we were able to sharpen its performance as a sensory amplifier with its light feel and high sensitivity performance.
With the improved sensitivity, you can sense not only bites but also fine signals such as bottom sediments and tides, and you can produce the strength of the action of the egi with a small rod action. We aim to be conscious of and freely manipulate from very small movements to aggressive movements. In terms of the image, it feels like the scale of the volume increases at once.

Using Calista as an amplifies the senses, which increases the variation of Egi’s action inputs. This was a big proposition from the planning stage, and it was a concept that could not be removed.

In the past model Calista, the first one in development was 86M. 86M is the basic model of Egging in terms of versatility.

However, for the 2023 Callista, development started from 82ML based on the concept of seeking a more delicate sense as mentioned above. After sharpening the 82ML first, we adjusted the other four models.

The reason for developing the medium light class is to match the evolution of the current line. The line is thinner and stronger, and it is less susceptible to water resistance, so the feeling of egging has definitely evolved.

The assumed mainline of the previous Calista basic model 86M was PE0.6~0.8, while the basic model of 2023 Calista is 82ML, and the assumed mainline is PE0.4~0.6.
With banks form us, you should be able to create egging rods that combine flexibility, sharpness, and speed, making the most of the advantages of the light line. That’s why 82ML was chosen as the development base.

In addition to the 82ML, there are three medium-light class models: 90LML for long-range, finesse games, and 76ML, which focuses on improving the precision of casting and jerking. And one medium heavy class model 79MMH demanded accurate operation of large egi with tough power.
These 5 models are not simply models by power class, but the basis of all models is the thorough pursuit of light casting performance and Egi operation performance.

All models have been designed with a concept that has never existed before, which is why 2023 Callista is not a renewal but a reconstruction.

So let us explain about the concept of each model…
・82ML and 86M that are all-rounder. For those looking for comfort and efficiency, first choose one according to your target size and situation!
・76ML for spring shallow area capture, boat egging and when you aim to autumn squid fishing without staying same spot!
・90 LML for tidal currents, high scaffolding points, when you aim target on algae fields in spring, and waiting for migration in areas that require long casts!
・If you want to use egi No. 4 or deep at the deep point, and want to move the egi as intended with good response, use 79MMH!

2023 Calista is a model that we would like you to pick up and feel it, and it is a rod that you can feel many things by doing so.
2023 Calista will be exhibited at various fishing tackle trade show starting in January 2023.
Please come and feel them!!