Introducing the 4 models of “SeaWalk Tairubber” that will be released in the spring of 2023.

There are three points we would like to introduce in this blog.

①Thorough explanation of the concept divided into four styles

② Search for models that match the sea area and style

【Thorough explanation of the concept divided into four styles】 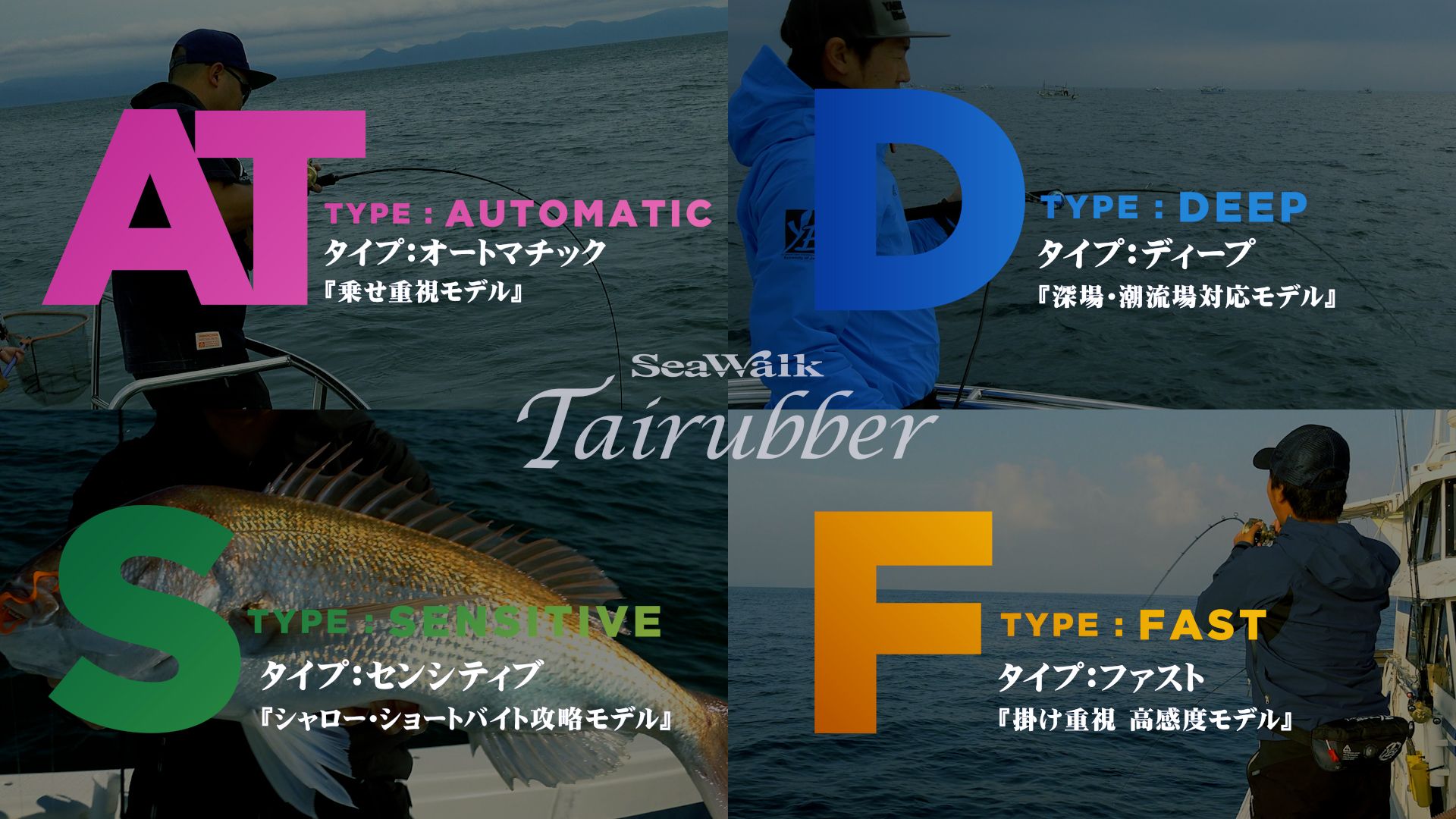 AT～Automatic～
“AT” (Automatic) type for simple reeling of the tairubber, allowing for automatic setting of the hook

S～Sensitive～
“S” (sensitive) type, with the most flexible tip of the series, to capture the slightest bites of the spooky fish in the shallows area

【Search for models that match the sea area and style】

Style: Simple reeling of the tail rubber, allowing for automatic setting of the hook

Recommended water depth: About 30 to 100m (depending on various conditions such as tidal currents)

・For the angler who wants to cover a wide range of water depths and weights of tail rubber with one rod.

・For the angler who wishes to have fun with both small and large red sea breams with a feeling of reassurance.

The performance of the 70AT is the basic performance for “automatic” hooking by “just winding the tail rubber” and the high versatility that can cover a wide range of situations. 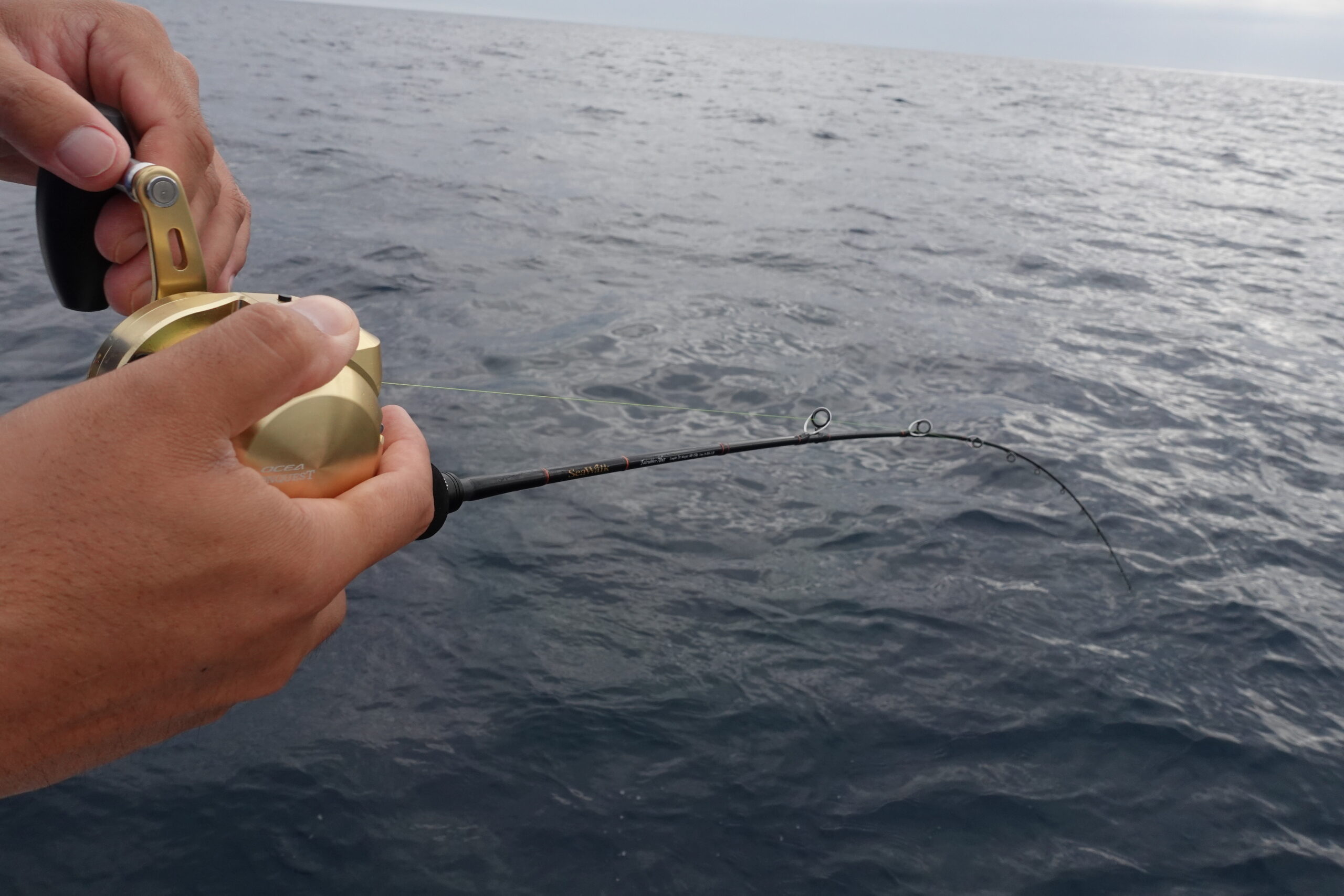 We focused on the followability of the tip to the belly in order to bring it into the hooking without giving a sense of discomfort to small bites.
When using a 150g tail rubber in a water depth of 100m, the tip does not stay bent even when a load is applied, and the tip and belly bend further to follow the bite of the fish.

Furthermore, by giving “Stiffness” to the butt part, “automatic hooking just by winding” is possible! 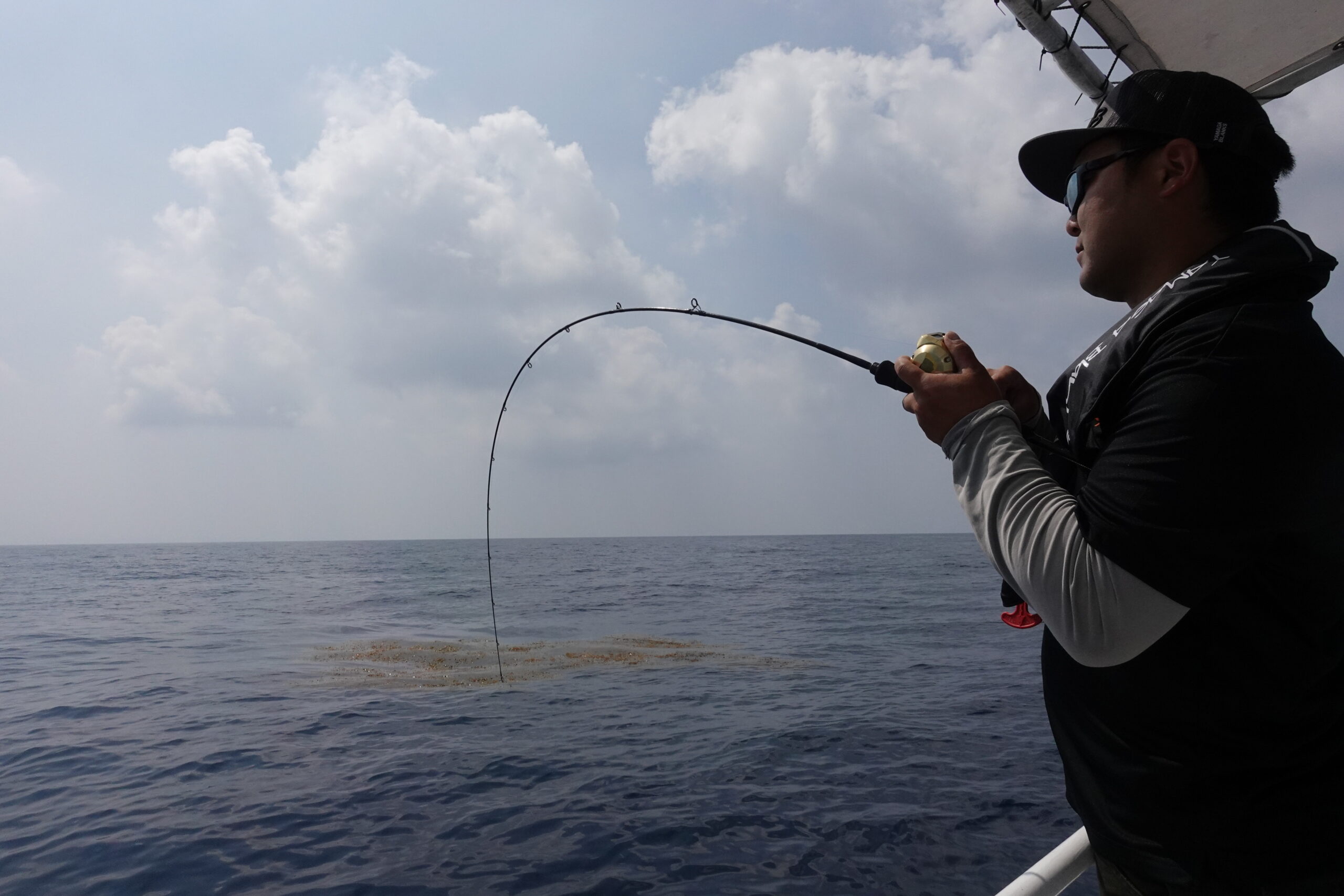 The main reason why we set up the length “7ft” is to maximize the functions of each part of the rod for automatically hooking the fish!

As for the fighting performance, it absorbs the movement of small red sea bream and the good size of red sea bream that rage when the blank bends greatly like a cushion, so it reduces hook elongation when hooking other than the mouth.

The slim but robust butt blank, not just bent, lifts the fish firmly.

Since it is a model with a total balance, it is also recommended for beginners of tail rubber games! 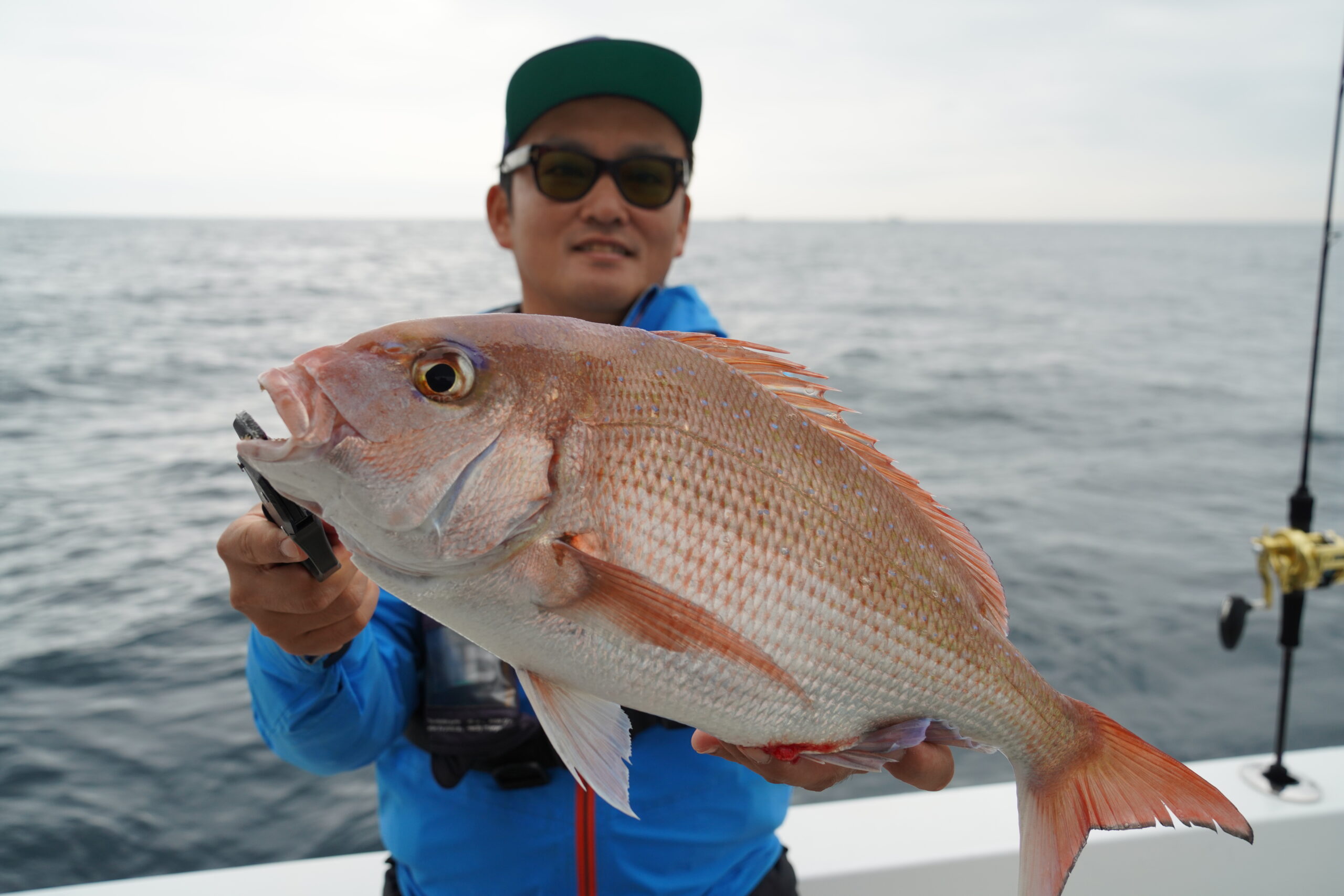 Style: Captures complex tidal currents such as deep waters over 100m and straits.

・For the angler who wants to emphasize stickiness and followability instead of hard rods!

It is a model that specializes in deep tail rubber that uses heavyweight tail rubber of 150 to 200g and captures deep areas!
The specs and appearance of the rod may give the impression of being stiff, but in reality, it is a slim blank and has a side that bends obediently even under load.

Especially in the deep tail rubber game, it is made flexible from the tip to the belly so that it can follow the swaying of the waves in the open sea where the water is deep, concentrate on winding, and obtain as much information as possible under the sea. 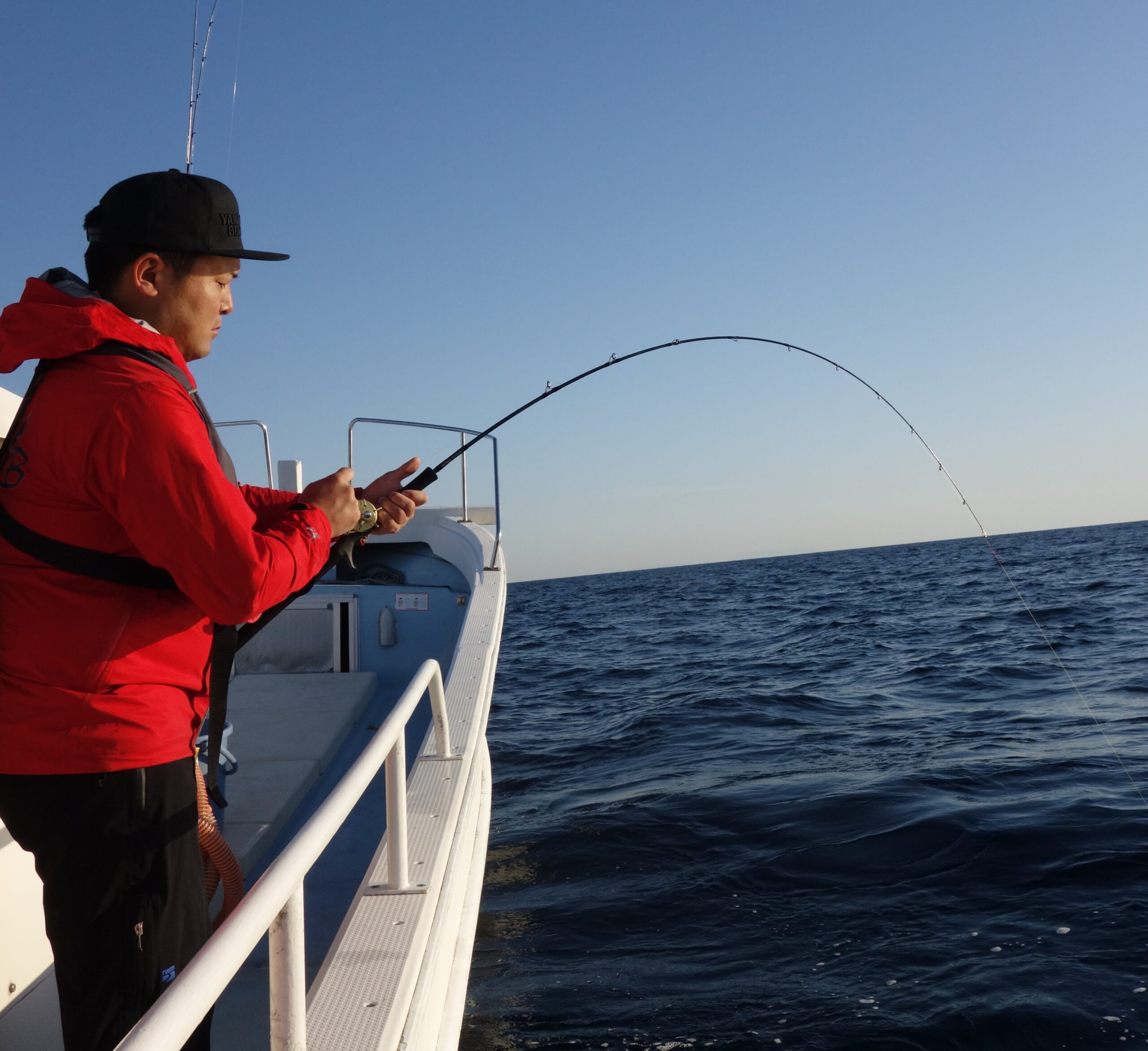 By bringing the fulcrum of the bend closer to the hand even against the load of the heavyweight tail rubber, reeling can be done lightly.

We believe that one of the most attractive features of Tai rubber game in deep water is the high probability of catching large red sea bream.

When you are reeling horizontally with more than 200m of the line out of the reel, it sounds really tough doesn’t it?

Even when water pressure is applied very heavily, this 611/D bend tenaciously and your physical strength will be saved. It is also possible to fight easily, and it also leads to an increase in the possibility of landing.

In addition, the long front grip allows you to change the fighting position when you get tired of a long fight under the armpit and has refined the basic performance necessary to comfortably perform deep tail rubber.

In addition, it is easy to hold hands when using the electric reel, and you can enjoy the electric tail rubber comfortably with both hands. In addition to deep areas, it is also useful in situations where you dare to use a heavyweight tail rubber in a complicated tidal field or two tides in the summer. 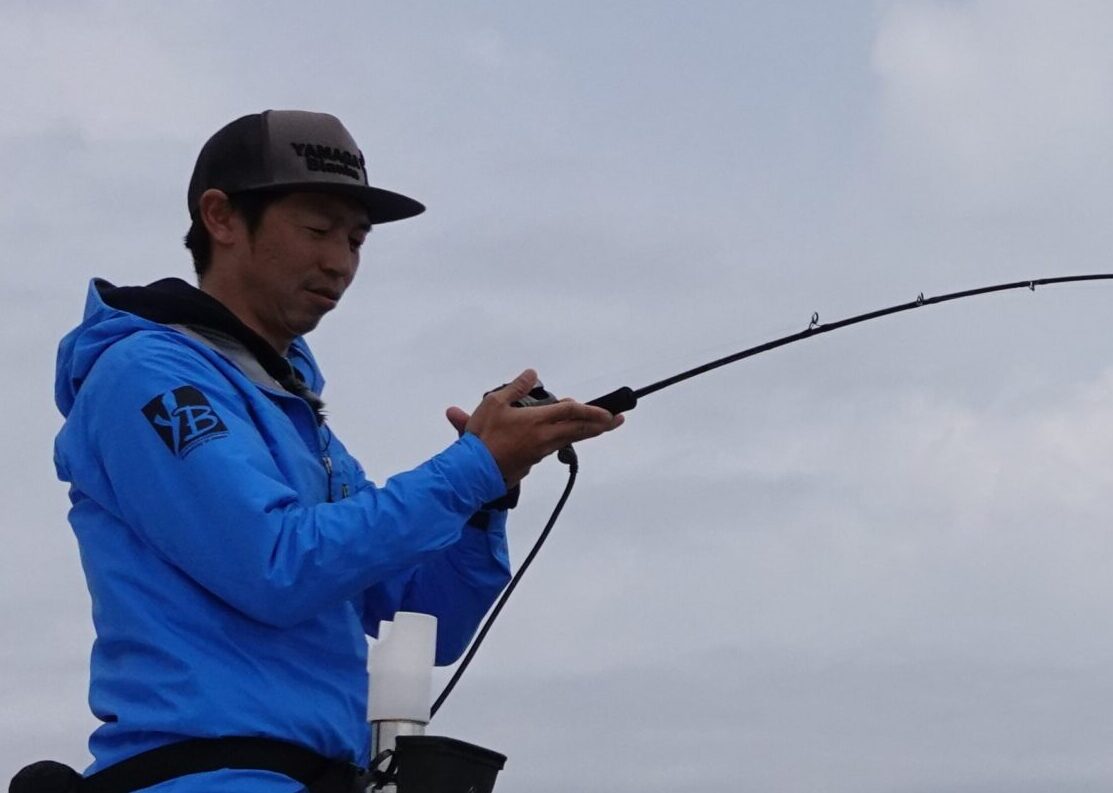 Style : Setting the hook delicately and technically even if it is nibble

Although the basis of characteristics of 72S is the same as 70AT, 72S is a “situation-specific” model.

For example, it is a model to capture with a sensitive and flexible tip in situations where the shallow water depths, narrow bite zone due to the vertical situation, and situations where you have to make a few small nibbles with low activity. 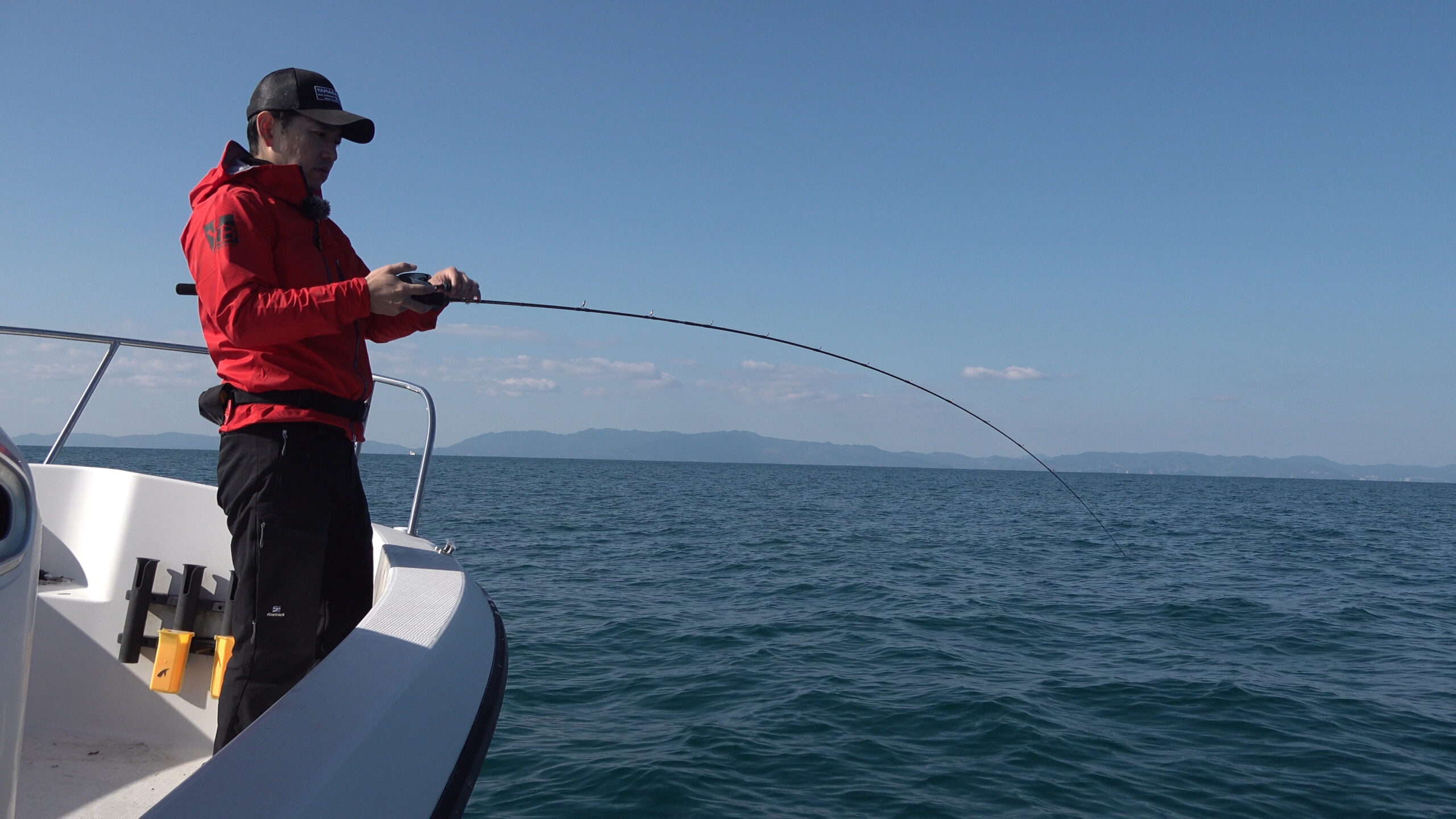 Blanks that bend nice and deeply which is making use of length itself give you more chances to set the hook even if it nibbles.
On the fighting, it follows the run of red sea bream with a nice and deep bend, and you can feel safe at all times if you use a PE0.4 light line to reduce the inferences from the current. 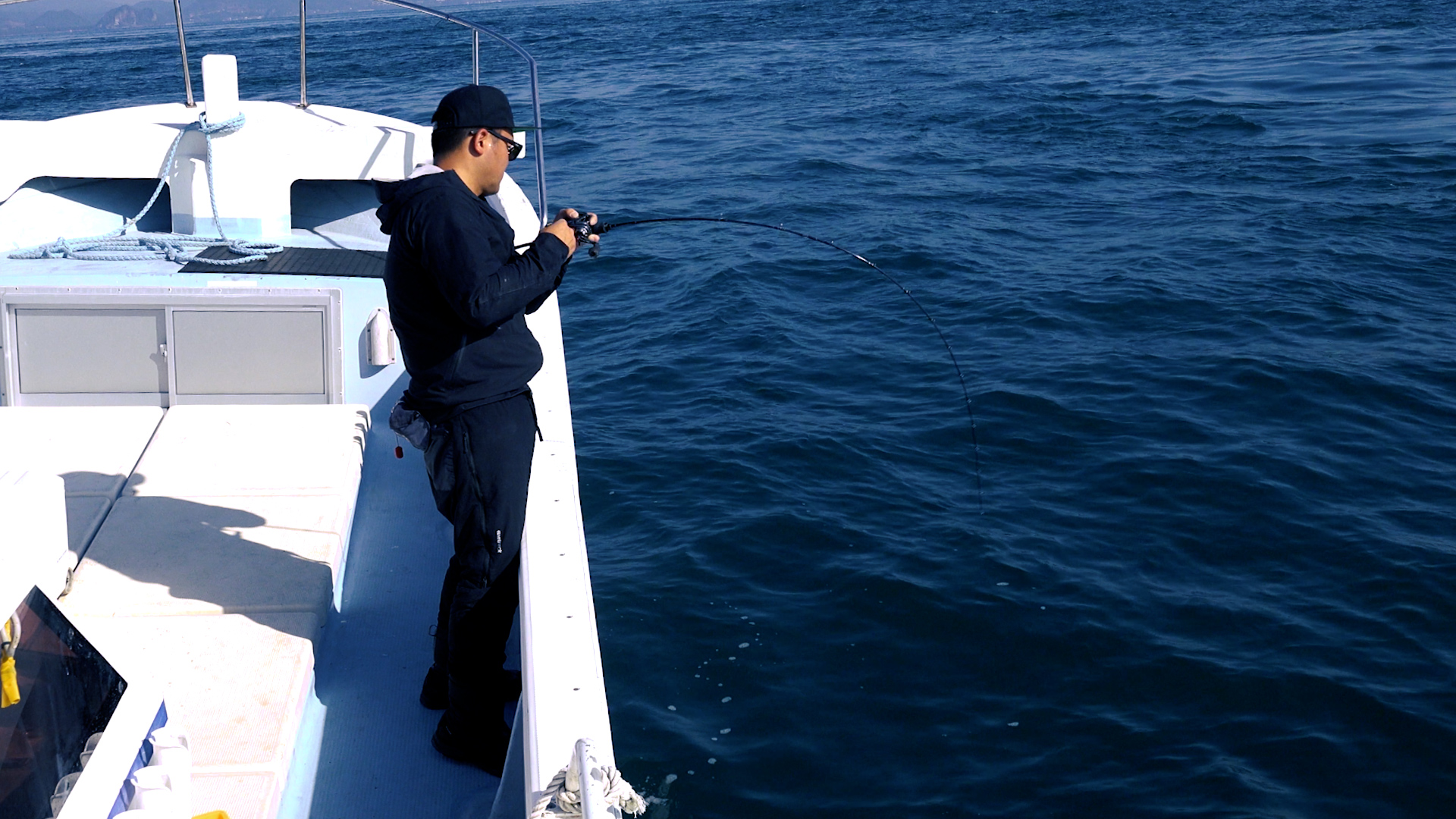 By constructing the entire rod with a tubular blank, we made it just 100g in weight, and not only you can accurately convey changes in water flow and transmit the feeling when you reached the bottom of the sea but you can also experience the “high repulsive force ” during a fight.

Furthermore, by pursuing the balance of the rod, the feeling of holding it in your hand is light and sharp. It is a discerning finish that heavily incorporates the elements of YB’s BlueCurrent (light game category)! 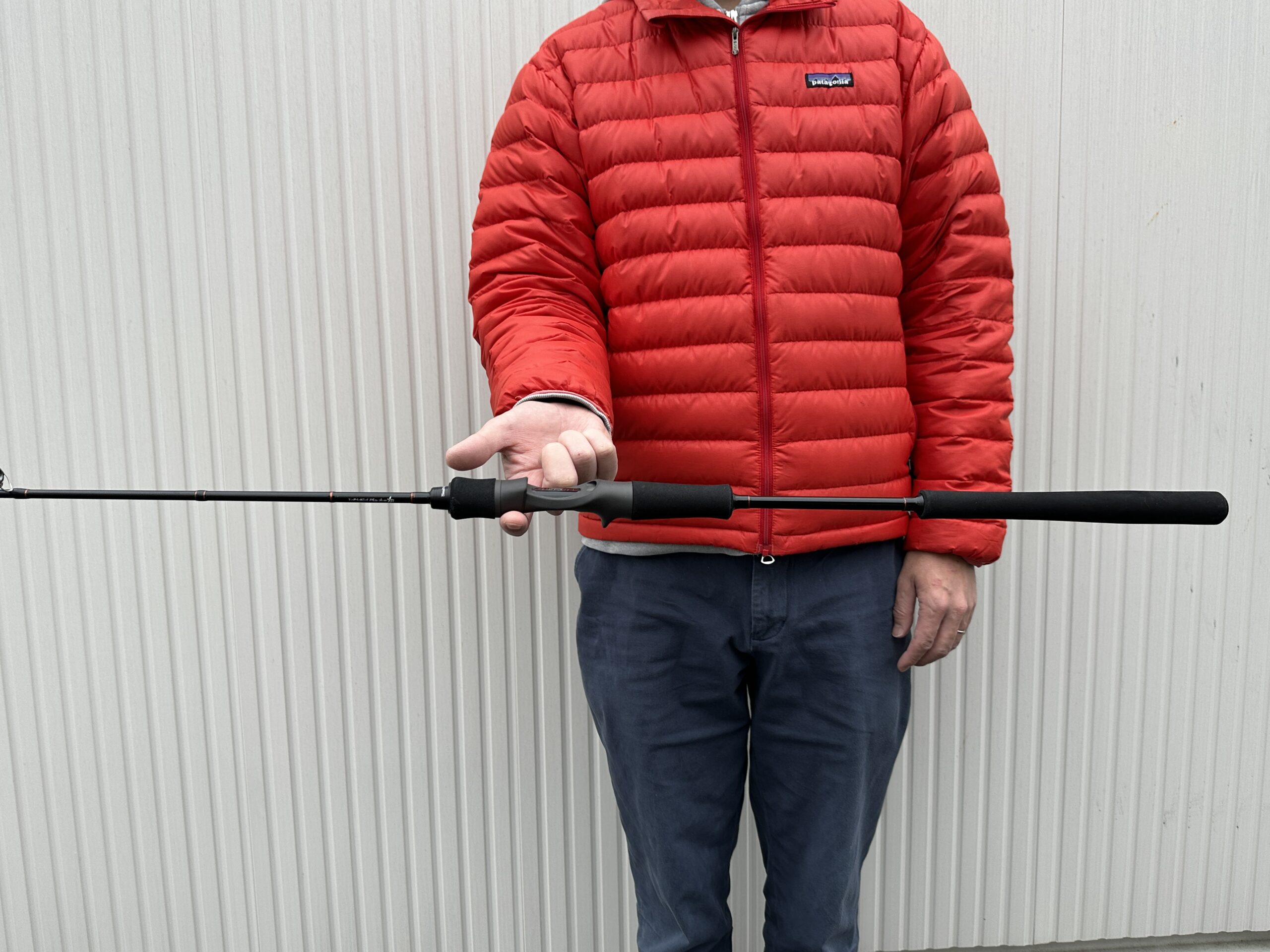 Style : A style to strike aggressively and quickly on your timing.

This 60F is a specialized model for developing an aggressive Tai rubber game that “Strike” the bite or nibble at your own timing!

This is the only one that is equipped with the carbon solid tip in the series.

You can see and sense the nibbles with improved sensitivity.

And it assists the increasing reaction speed to make “Quick-strike” the nibbles. Conversely, you can also let him take Tairubber doubtlessly and strike after letting it run for a while as you wish.

In addition, by giving moderate stiffness to the belly part, the hooking response has been further enhanced! 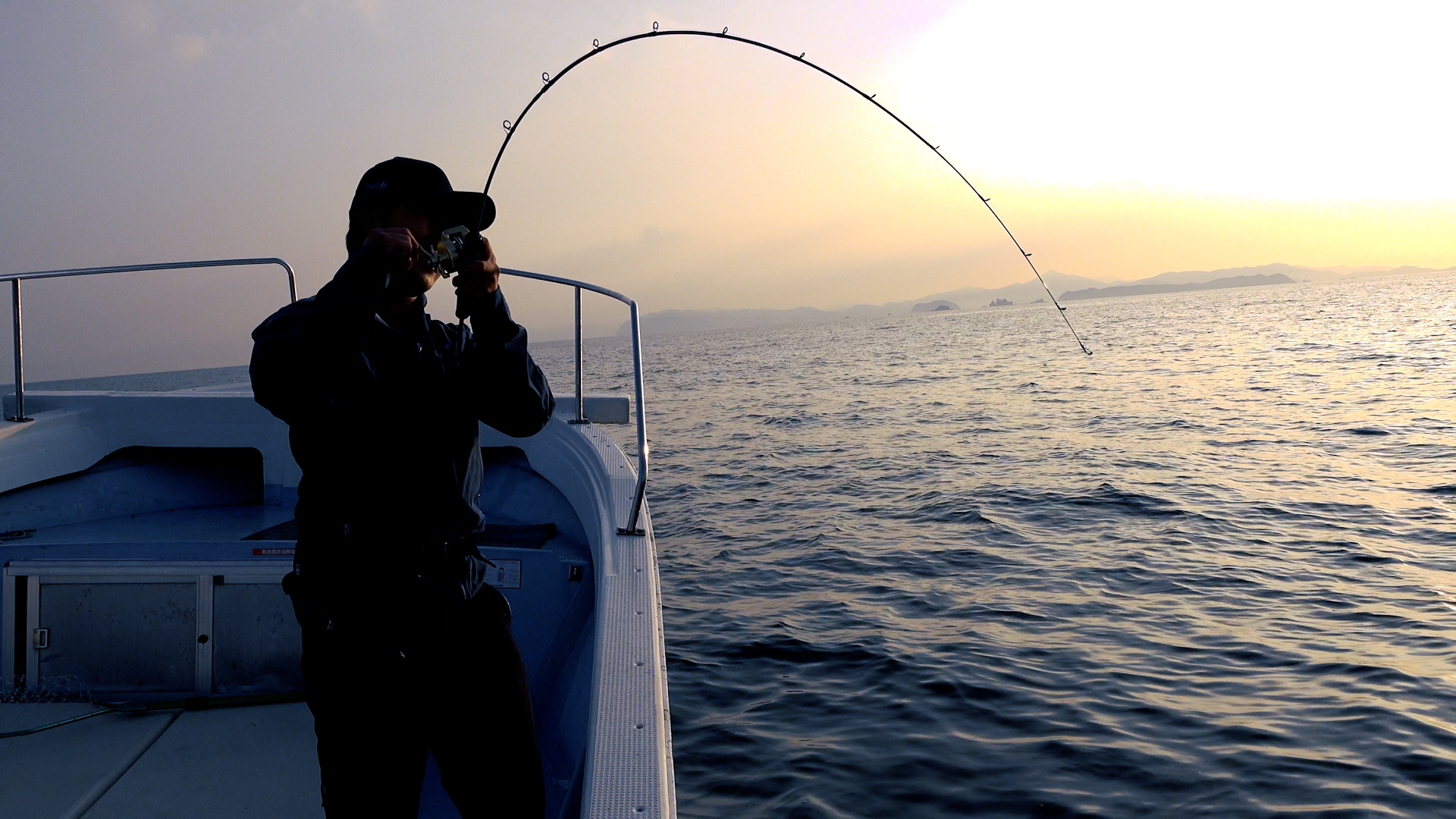 The element that we maintain carefully is the comfortable feeling of winding Tai rubber with this short rod while making use of its moderate stiffness.

Some people have experienced that with a rod with stiffness, the movement of the winding hand during reeling is directly reflected in the rod, causing blurring, or being distracted and unable to concentrate when reeling at a constant speed. Isn’t it?

The point that this 60F was particular about is that while maintaining the tension of the belly necessary for hooking, by bringing the fulcrum of the bend closer to yourself, it is possible to secure followability to the load even though the length is short. It has become a model that allows you to concentrate more and enjoy “Strike” the bite.

Not only is it a hanging tie mule game from the high response performance of hooking, but also in tie jigging using a jig, it is of course quick to wake up from just winding the jig. The operability of the reeling jerk of the tungsten jig is also good, so you can enjoy the red sea bream game using both the tie mule and the jig with this single model!!

This 60F works when you wish to strike aggressively while making use of its response speed which is equipped with blanks.
Besides, you can use a metal jig with it while maintaining the reeling speed constantly and let you strike as soon as you sense the bite.
This 60F covers both methods and conditions comfortably. 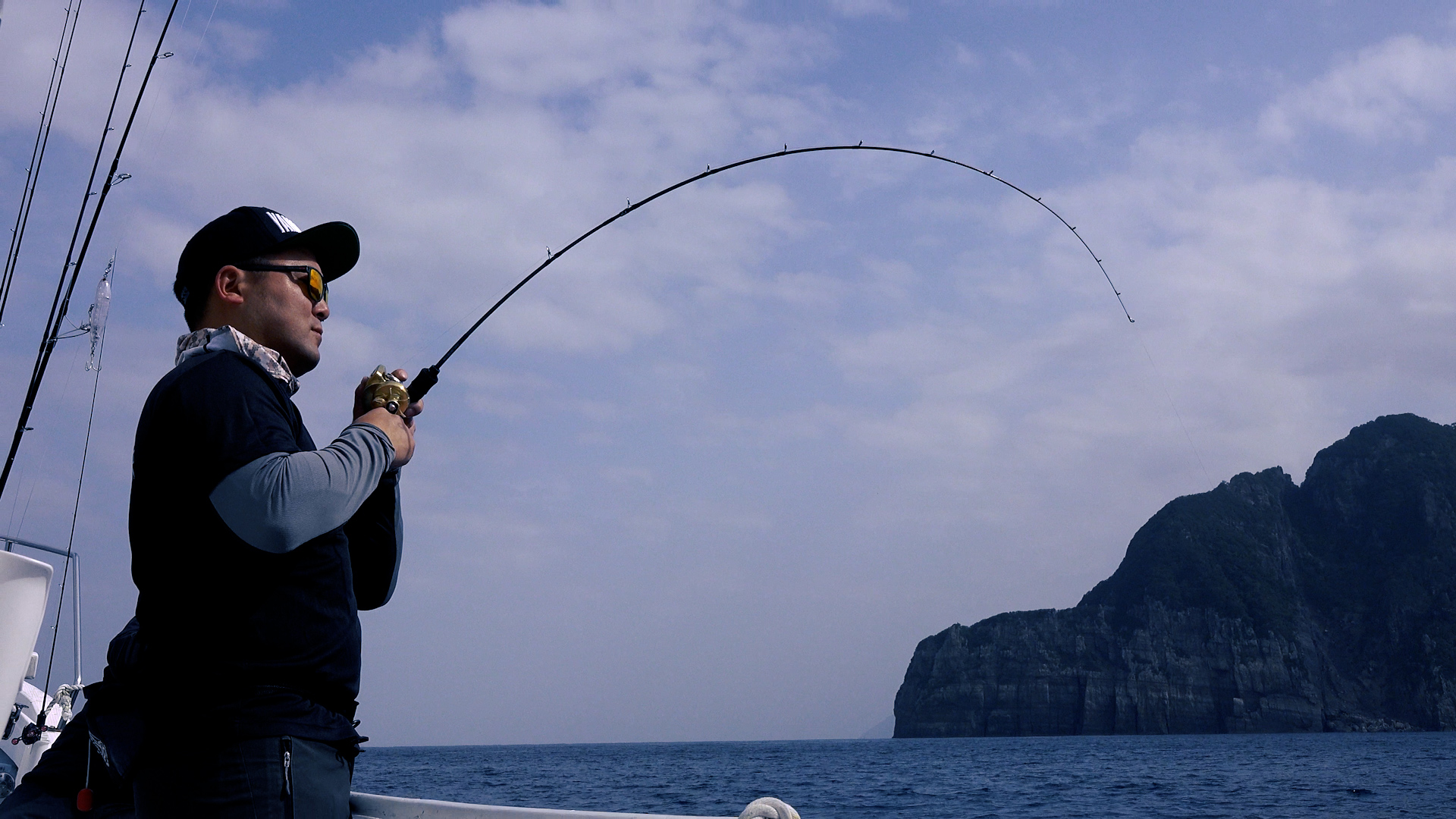 Please be careful when handling the 60F carbon solid tip.

The carbon solid tip is very delicate against impact, so please pay attention to the following note.

●Damages due to dust clogging
Floating objects such as jellyfish, which are common in spring and early summer, adhere to the line and eventually accumulate enough to clog the guide, leading to tip damage due to entanglement, so please clean the line frequently.

●Damages due to casting
When casting, the line may get entangled in the solid tip part due to interference between the binding part and the guide. A heavy Tai rubber applies a strong force to the part where the solid tip section is entwined, so it may cause breakage easily. Please refrain from casting at 60F as much as possible.

●Damages due to ship movement
When reattaching or moving the point, the Tai rubber bounces due to the vibrations and waves of the rod inserted in the holder, and a strong impact is applied to the tip, which may cause breakage. Fix the Tai rubber so that it does not bounce, or do not apply impact to the tip.

We hope that you will be able to enjoy the characteristics of the 60F after paying attention to the note above.